The association AGTER runs an international network of people, exchanging and thinking together how to improve the governance of land, water and natural resources.The network selects and makes information available but it also formulates suggestions and alternatives to face the current great challenges. This quaterly newsletter is presenting the latest information available on our website : www.agter.asso.fr.

For an International Court of Justice with the power to hold corporations legally accountable for human rights violations!

Translated from French by Jesse Rafert

A global alliance has formed to advocate for the creation of a supranational court with the judicial authority to prosecute corporate human rights abuses! In an age where profit is consistently valued over the public interest, AGTER is fully supporting the alliance and invites you to do so by signing this petition in favor of a binding UN treaty that prioritizes respect for human rights!

International human rights law enshrines essential individual and collective rights: the rights to life, liberty, security, shelter, health, education, adequate nutrition, access to natural resources, and civic and political freedoms. These rights are enacted in international treaties that have been signed by a vast majority of the world’s governments, such as the United Nations Charter (1945), the Universal Declaration of Human Rights (1948), and the International Covenant on Civil and Political Rights (1966)…

However only a handful of highly specific cases are heard at the international level. In other words, no international human rights court currently has the power to hold individuals, governments, or corporations accountable for every case of human rights abuse. The states that signed these treaties promised to enforce fundamental human rights at the national level. However, many national court systems fail to provide all citizens with reliable access to impartial justice.

Is corporate freedom more important than human rights? International trade and investment rights are scrupulously enforced by supranational courts, which have the power to impose non-derogable sanctions on states that violate International Investment Agreements. National governments willingly defer to their judicial authority, regularly agreeing to pay tens of millions of dollars to corporate plaintiffs seeking relief under these agreements.

In 2009, Monique Chemillier-Gendreau, Emeritus Professor of Political Science and Public Law at the University Paris - Diderot, shed light on the devastating effects that this double standard has had on natural resource sharing and preservation during one of AGTER’s thematic meetings. This specialist in international law and political theory brought great clarity to the duality of international law, which is “hard” when it comes to the enforcement of trade and investment rights and “soft” when it comes to the enforcement of fundamental human rights, and discussed the effect that the current system has had in the realm of land and natural resource use. She emphasized the need for a supranational judicial entity with the authority to identify and punish those of their actions that must be condemned as well as corporations ones.

Since then, our organization has continued to highlight this lack of supranational “justiciability”, which means the need of a supranational judicial entity with the authority to enforce human rights standard. We have continually drawn attention to the inadequacy - and risks of - efforts aimed exclusively at developing non-binding and unenforceable international agreements (for example, the Voluntary Guidelines on the Responsible Governance of Tenure of Land, Fisheries, and Forests in the Context of National Food Security, or the Peasants’ Rights Declaration). These may lead citizens to lose even more faith in human rights law, which already lack efficacy.

Today, thanks to the national and international campaigns for a binding UN treaty, many organizations are now advocating for the creation of a supranational court with binding judicial authority. National governments and private economic interests obviously oppose this plan. Citizens must therefore impose it on them.

During this early stage of our effort to create a judicial hierarchy that benefits everyone, your signature and assistance sharing this petition widely will play a crucial role in giving this demand weight. Organizing or participating in discussions about this issue, and continuing to draw attention to the impunity enjoyed by multinationals and national governments that violate fundamental human rights, will also make it more persuasive. We must put an end to this scandal.

The conference-discussions that the Cit in France against Land Grabbing organized at the beginning of the year focused on the communities confronting Bolloré-Socfin plantations in Cameroon and Cambodia and the various transnational resistance strategies that they have developed. The conference-discussion that took place on January 15th focused on “The Binding UN Treaty.” Summaries of these conferences are linked under the “video” rubric below.

The issue of land preservation in Europe is also the subject of intense debate. In France, the struggle against “Large Useless Projects” is a newsworthy topic in many areas of the country, as demonstrated by popular resistance to plans to pave the “ZAD” (Zone to be defended in French, as named by the opponents to a new airport here) in Notre Dame des Landes near Nantes, and the “Triangle de Gonesse” in the north of Paris. In both cases, strong vigilance remains necessary regarding governmental land preservation measures which are finally granted, as those may be clearly insufficient. The statement that Robert Levesque, AGTER’s President, produced in response to a public consultation regarding the “Protected Agricultural Zone” project in Gonesse (link below) reveals the importance of continuing to mobilize.

According to the coalition in favor of “legislation that encourages the preservation and sharing of agricultural and natural lands” (organized upon the request of AGTER, Terre de Liens, and the Confédération Paysanne), France’s rules concerning land affectation and use must be reviewed in their entirety. Coalition members shared their analyses and proposals during a colloquium held at the National Assembly. The event demonstrated that there is currently little consensus regarding the importance of such legislation amongst members of the Parliament... You can find a link to the video recording of this debate below.

1 May 2020, by Monique Chemilier Gendreau 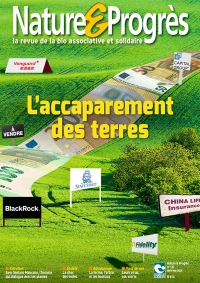 Online course offered by AGTER and ILC on “Land grabbing around the world, a toolbox to help identify, analyse, and implement change” (25th of May, 2020 - 19th of June, 2020)

AGTER and the International Land Coalition are inviting members of civil society, farmer organisations, development professionals, researchers, journalists, students and others interested in participating in an online class on land grabbing around the world, and who would like to learn how to analyse and understand the true nature of this worrying trend, in order to work together to bring solutions in the face of this threat to us all.

Land Grabbing and land concentration around the world: a threat to us all

Translation by Elisabeth Gross and Niels Zwarteveen of the article published as part of report on: “Agricultural land: both a common good and source of tension”. Produced by GREP & Terre de Liens for review, POUR n°220, December 2013.

Newsletter AGTER December 2019. For an International Court of Justice with the power to hold corporations legally accountable for human rights violations!

Duty of Vigilance: corporate legal responsibility and impacts on agriculture in the Global South The Notes of South. # 17

A presentation of the Land Office (Office Foncier), central piece of the innovative system imagined by Edgard Pisani, former Minister of Agriculture in France in the 1960s, to improve the management of agricultural lands. Pisani’s land project was part of the program of the Socialist Party for the elections of 1981, but once the Left came to power, it was quickly abandoned. While some practical arrangements may now seem to have aged a bit, his proposals are still overall of remarkable relevance.